I never really got into that game, we played it once because it looked cool on shows like Degrassi Junior High, but my house didn't have a closet so we had to do it in our laundry room. Not quite the same with fluorescent lighting and the smell of washing powder...

But I'm getting off topic! This is in fact 7 minutes in Heaven with... LOCO. What? Haven't heard of the guy? Have you been living under a rock that doesn't include awesome books or amazon.com?? You loser! If you don't know Loco, (but I know you all do) get clicking and to buying his book. Right now! 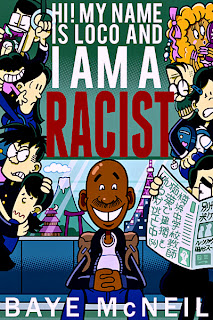 I support this guy for many reasons, in percentages, it's about 10% that he's one talented writer who has had the skill, balls and artistry to not only write a fantastic book, but make sure it got published, unlike so many other writers who just whinge about their dream never coming true... 5% that he's a fellow ex-pat in Japan and I can relate to what he writes about...5% that although we've never met in person, he seems like a genuinely good bloke...Annnnnd 80% that I have a massive married-woman crush on him. Wait, do my percentages add up...? maths never was my strong point.

So without further cunting about, here are 7 minutes in Heaven with Loco, or you could just skip this post and support the dude by buying his book. Either or really!

1) So Loco, now you’re a big-shot published author you’re not going to forget us little people are you?


Nah, I would never do that, Karen, you know me…lol, just kidding, Casey! But I wouldn’t throw around words like big-shot just yet. We can have that conversation about the contempt I hold for the pissants I’ll be stepping over on my meteoric rise to stardom once I’ve actually sold a few…more.


2) Was writing a book like in the movies, you had to send it to 100’s of publishers while living on cup ramen to support yourself and then finally got discovered? Take us through the process.

Nah, my process was nothing like those movies…no romanticized starving artist here. Mine was more like “Hustle and Flow” lol I’m strictly indie over here. I finished the book and I had to make a decision: Send my manuscript off to the big boys (as I’ve done before) where it’ll likely (if I were among the lucky ones that didn’t fall in the shredder bin) sit in the file cabinet of an editor looking for the next JK Rowling or Terry Macmillan, in a folder with a post-it on it that says “great cover but a little controversial and genre-challenged – thus a headache to market,

Or… I could go indie, do the thing my damn self, and see if I can’t do what I would have had to do anyway once the three months the big boys would have pushed it were up, and market it myself! I went with the latter. This book was indie published by my own company, Hunterfly Road Publishing, and we’ll see if I can’t do this through the limited but choice network of netizens, colleagues, and friends I’ve managed to build up over the past 8 years of building relationships and having an online presence. I’m grinding with my mind and heart open and my fingers crossed. I’ve got a great product (he said humbly) so it’s just a matter of getting it read, reviewed, plugged and eventually, god-willing, bought. That’s my process, and I’m sticking to it.

And I have a full time job and private students out the ass, so I can afford real ramen…occasionally.


3) If your book were translated into Japanese how do you think the J-peeps would react?

I guess it depends on their experiences prior to reading it, you know? Also, it would depend on their ability to refrain from having an emotional knee-jerk response to the word “racist,” and read the book. If they read it I think there’s a 75/25 chance they’ll be intrigued if not blown away, entertained and possibly even learn something. That’s certainly how I like to feel when I read a new book. In fact, I think they’ll respond the same way people of any nationality will respond…according to their individual tastes and mindsets. I’ve been here long enough (as have you) to know that though people seem to be on the same page here, in reality there is a lot of individuality trapped beneath the surface. I learned this over the course of my eight years here. I teach private students. I’ve had well over a hundred in that time. And the ones I’ve had during the writing and editing of this book have enthusiastically discussed the issues from this book with me, and the general response has been, “I can’t wait to read it!” That’s been encouraging to say the least. And I’ll be definitely translating it into Japanese at first opportunity so more of the populous can have the opportunity to see life here from a different perspective.


4) Who is your favourite author (no choosing yourself now!) ?

Difficult. Can I give my top five instead? Thanks lol. OK, we have Zora Neale Hurston, James Baldwin, Toni Morrison, Chester Himes and Jim Thompson. Zora wrote my favorite book of all time, “Their eyes were watching God.” James Baldwin is actually my role model. No one kept it realer than him! Toni makes me want to smash my pen and my fingers she’s so amazing. I almost feel ashamed to call myself a writer (but I’m gonna call myself one anyway cuz I know she’d want me to…right Toni?) Chester? Lord have mercy! First time I read “If he hollers let him go” I was ruined. My dreams of being a train engineer flew right out the window. And his Harlem crime series, starring two characters that play out in my head every time I try to write dialogue, namely Coffin Ed and Gravedigger Jones, two corrupt black cops in 1940s Harlem, was just off the chain great. And Jim-bo? Geeeezus!! He’s the only writer that has ever given me nightmares…I mean his writing is downright dangerous! Dirty, grimy, and all too human. Check out “ The Killer Inside Me” and you’ll know what I mean.


5) Do you think you’ll stay in Japan forever?

Nah, but I know for damn sure Japan will stay in me forever!


6) Have you achieved your ultimate goal now, where do you go from here? A movie? A stage show??

Nah…got so many things I wanna do that I’m starting to get scared I might have wasted too much time as it is. This book, Hi! My Name is Loco and I am a Racist, I think of as a calling card, or a résumé. My way of introducing myself to the world and showing people what I’ve got. But, aside from writing stories, I also love movies! I’m a movie fanatic, and I think there are parts of this book that, if fleshed out, would make a great film! Stage shows aren’t really my thing. Growing up in NY, in arguably the arts and cultural center of the universe, I’ve probably seen maybe three or four Broadway plays in my life. Prototypical New Yorker, I am. I’ve never even been to the statue of liberty. Broadway and Statues are for tourist lol


7) When your book tour comes to Osaka, will you sign my boobs??

LOL! You know, before I came to Japan, I wasn’t much of a boob-man. In NY boobs area dime-a-dozen. But, since coming here I’ve developed a renewed appreciation for love jugs! So yeah you can count on this big shot paying your big boobs some attention.


Thanks again for having me Corinne…you are a great person which is why you are so beloved. It takes a certain kind of person to live out loud the way you do. It takes a little courage, a little nuttiness and whole lot of love and generosity, whether you’re aware of it or not, and people recognize and respect it! It’s amazing what happens here in the Japan blogosphere. Every day, especially recently, I get pimped slapped by how much love is here, generated and cultivated by people like you!

See! I don't even know if that last little message was meant to be just for me, but how nice is this guy?! OK OK so I'm biased due to married (fuck pregnant too) woman crush-itis, but trust me, the book is worth the read, whether you have lived in Japan or not, although I have to agree with the Bad Boy, where the fuck is the Ferris wheel?!

Oh and no bullshit that you are not techno-minded and can't get it on kindle, I am the biggest dickhead in the world when it comes to technomaology and even I figured it out!


Thanks for the 7 minutes Loco, I will be holding you to your boob-signing promise!
Posted by Corinne at 17:36

Click if you want more than flowers and temples!

A collection headed up by the bad boy of funny, witty, dirty and just plain awesome Japan blogs!

Corinne
I'm an Aussie girl living in Japan who was having a great time single, in 2008 I met my boyfriend who quickly turned into my hubby after we discovered I was preggers! I must be mad marrying a man I've known for 3 months, but with the crazy divorce rate I figure we may be screwed either way, no matter how long we've known each other. We now live in Hyogo with our 3 little boys about 4 steps away from my mother-in-law's house. Fun times!!!

Blogs I can't not read

Nice of you to pop in